This all started with my observance of how I wash dishes. Was I wasting water? I thought so, but didn't know exactly. So I began to experiment, test out my theories, figure out how to wash dishes, save water, and wash them clean and sanitary. Hot soapy water, cold vinegar water.

I really had not paid much attention to how many gallons I used. After all, on the bill I am charged for units. But, I didn't know that a unit was 748 gallons. 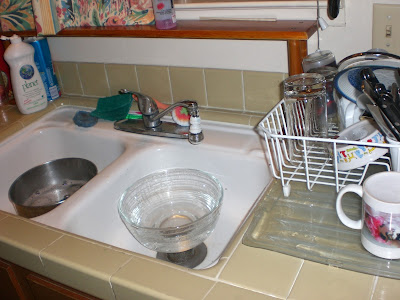 So, I've been on a quest lately to be more aware of my water usage. As I mentioned in a few previous posts, I have been looking at how I wash dishes. So many have told me it is better to use an automatic dishwasher instead of washing by hand. I was told it would only use thirteen gallons of water as compared to an unknown amount for hand washing, considered to be at least twice as much. Perhaps that is true for large families who have large loads of dishes. But, as a senior citizen living alone, I couldn't accept the idea that a dishwasher would use more. So I took a serious look at just exactly how much water I was using to wash dishes. I had long ago given up letting the faucet run while rinsing dishes. I had no way to determine how much water it would take to rinse my dishes. I suppose I could put the stopper in the sink and see if it overflows during rinsing. but I haven't done that.

In the meantime I thought about the size of my double sinks which measure on the inside as 14 1/2 in. x 13 1/2 in. x 5 in. For the sake of measurement of the water, I deducted an inch on the depth. five inches is where the top of my water line is. If I fill one side for washing and the other for rinsing, I have determined the most I would use is approximately 5 gallons. I filled up one side with my soapy water until there was enough room for my dishes, then I measured how much water was in there, about 2.5 gallon, so two sinks filled with that much water is approximately 5 gals. If I were to wash dishes every day that would be approximately 150 gallons per month usage. However, I was only once or twice a week. Washing once a week comes to 20 gallons a month. Washing twice a week comes to 40 gallons a month. This comes to 240 or 480 gallons a year.

So, then, I thought, I have two plastic wash pans somewhere. After a little hunting around, there they were crammed up against the back wall underneath the sink. Why did I buy them in the first place if I didn't use them? So, I dug them out and hoped the bottom would give the exact gallons they were supposed to hold. It didn't. I realized very soon that they didn't quite fit into my sink as the length was a tiny bit longer, so that must be why I sacrificed them. They do not lie flat in the sink. They are slanted at maybe 5 degrees or less. So I got a large metal pan out of my cupboard, and a large glass bowl. They suffice!
Posted by Elizabeth Munroz No comments: