Living in California the majority of my life, I've felt plenty of earthquakes. The mild ones under 4.0 on the Richter scale are seldom noticed. They are nothing more than if someone was standing on the back of your car and bouncing a bit. As the intensity of the quake is greater, the higher the number on the Richter scale. Once an earthquake reaches 5.0 it can be felt strongly. Once it reaches 6.0 it is so strong that buildings can shudder, grocery store shelves lose their supplies and people are more likely to run into the street. You can see the trees and telephone wires swinging back and forth. For each degree after that the increase in intensity can be very forceful. In disadvantaged or undeveloped countries an earthquake measuring 6.0 can cause considerable severe damage.

Four days before the 7.0 earthquake hit Haiti, a 6.5 earthquake hit a city called Eureka in California located 653 miles (1050 KM) north of where if live. I felt it. Not hard, like the people who live there. But I felt it as many did, up and down the northern California area all the way over into Nevada. The Epicenter was just off the coast near Eureka. Being California, the area was able to sustain the damage without deaths or serious injuries, though, there are now reports of 22 million dollars in damages. (about 15.5 million Euros).

Over the last 300 years, Californians have learned that brick houses and other such buildings would be destroyed by earthquakes. Many deaths and injuries could be prevented by adequate engineering of structures. By the late 1920's guidelines for building were established and have been improved upon since then. The reason there were no deaths and serious injuries in Eureka, is because those building codes had been instituted. We are very fortunate compared to what has happened in Haiti. It is heartbreaking to see the damages, injuries and deaths due to that earthquake.


My First Experience with Earthquake.

When living near Vandenburg Air Force Base from 1963 to 1965, the earth rumbled more from the rocket and missile launches than it did from the few minor quakes I felt.

The first serious earthquake that affected my family was in 1971 on my Mother's birthday. She and my Dad had gone to visit my younger brother and his wife on a vacation from their home in New York State. The idea was to get out of winter snow and ice. I was staying at their home at the time, with my sister.

About 1 minute or so after the 6.6 to 7.0 quake occurred, my sister and I decided to call and wish Mom a happy birthday. We had no idea what had just happened. It seemed so odd that we couldn't get through. We called the operator to have her put us through. She told us all the lines were busy and to wait and call later. We waited a while and tried again. Still we couldn't get through. We called and asked an operator to try again. She abruptly said, "You can't get through! There's been an earthquake!"

It sent shivers up my spine. Though I hadn't experienced any quakes when I lived there. I knew it was serious if the telephone lines were not working.

There was nothing on the TV about it. We only got three channels in those days.

My sister and I were worried. We called a few more times in the hopes that all lines were no longer busy. But, still there was no connection. The thought occurred to me that if my parents were located where the worst damage happened, then our other relatives might be safe, and there telephones working.

So, we methodically went through the telephone book and called every relative we had in the Southern California region. Some did not connect. Some gave a permanent busy signal, a special kind of busy signal that let you know that it wasn't just a person talking on the line.

Then, I called Uncle Buddy's house. Lo' and behold, his telephone rang. Back in those times, you could ring a person's phone number constantly without interruption and that is exactly what I did. Suzan and I took turns holding the phone listening to the rings. We figured that if the phone was ringing the damage where my uncle lived could not be too bad. Of course, we realized that Uncle Buddy must have felt the quake, but hopefully his house was okay. 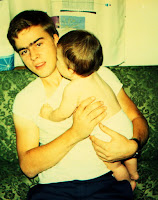 At one point we decided that if his phone was ringing to try my brother's phone again. Still no connection. Then trying Uncle Buddy's line got a regular busy signal. There was hope! He must have been using his phone. We waited a few minutes and called again. This time the phone rang twenty times, then Uncle Buddy answered the phone. He didn't understand at first who was calling as my voice was so strained and I was speaking so rapidly, and Suzan was suggesting things for me to say in the background.

I told him we had called to wish Mom happy birthday only to be told of the earthquake, that there was nothing on the TV about it and we were worried. Uncle Buddy had been out in the yard and not wanting to come into his house because of the aftershocks, and didn't want to stay on the phone for long. He had tried to call my brother's house and was unable to get through. The epicenter was reported to be very close to where my brother lived. Uncle Buddy promised he would try to find out what he could and call us back and let us know if everyone was alright. 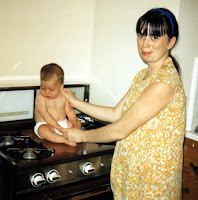 When the news was reported on TV We learned is was a serious quake called the Sylmar Quake. Sixty five people had died, another two thousand injured. Hospitals had been crushed and freeway overpasses had fallen, many highways were closed, landslides had caused damage to property, two dams had been destroyed. The biggest worry for us was that my brother lived near one of the dams that were being inspected to make sure it wouldn't crack. If so, there would be flooding.

Eventually, Uncle Buddy called us. Mom and Dad were okay, Roger and his wife, Sharon were okay. The baby, Carl, was okay. They had suffered no major damage. Roger's apartment was new enough that it had been built with earthquake safety in mind. Thank you, Engineers and Architects!

When we finally had the opportunity to speak with Mom and Dad, the wishing of Happy Birthday was forgotten. But, they hadn't forgotten, and we were reminded what a beautiful birthday it was. Suzan and I were confused at first, then Mom said it was beautiful because they all survived and did not suffer any damages. 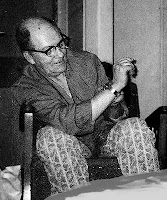 There was a bit of unforgettable story in this situation. Mom and Dad sleep on opposite sides of the bed. They are not spooners, they said. I began to feel uncomfortable. I didn't want to know how my parents slept. But, Mom, or was it Dad, continued to tell us, they had gotten in the habit of sleeping with their backs turned to each other, simply because they had opposite side of there bodies with a little arthritis pain and they were more comfortable this way.

Since they were sleeping at Roger's house, they were not used to the bright sunlight shining through the window. They were both just slightly awake. A moment before the quake occurred Dad turned over and snuggled up to Mom putting his arm around her. Luckily this kept her from falling off the edge of the bed and onto the floor. Even more luckily, when the big mirror from the dresser fell directly onto the bed, it landed exactly where Dad had just moved from. Dad was not injured and therefore another reason to be grateful.

If you would like to help the survivors of the earthquake in Haiti, please visit the links below which will direct you to the Canadian or American Red Cross web pages.

Both of them have donation forms which will allow you to send help to where it is most needed.